skip to main | skip to sidebar

Now that we have an understanding of uca, I suppose one of the most interesting features about fiddler crabs are its claws. 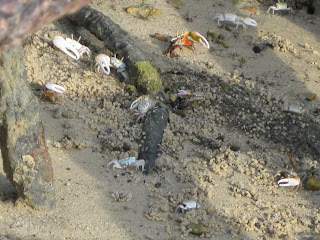 They have one big claw and a smaller claw. The above picture was taken using a rather normal camera, and I suppose one of the first things that could be seen clearly are the huge claws of the male fiddler crab.

What are the functions of these 2 claws?

The smaller claw is used mainly for feeding, but it is also the claw that maintains the survival of the crab. The bigger claw is simply too gigantic for the crab to pick up teeny sand grains and put it is mouth using it. The big claw serves mainly 3 functions. To fight, to indicate its territory, and to attract females.

But why? If we can see the crab so clearly, wouldn't it be spotted easily by potential predators of the crab? How would it survive in this case?

This brings about a theory that I found rather interesting. It is called the handicap principle.

This is from wikipedia:
"The handicap principle is a hypothesis originally proposed in 1975 by biologist Amotz Zahavi to explain how evolution may lead to "honest" or reliable signaling between animals who have an obvious motivation to bluff or deceive each other. The handicap principle suggests that reliable signals must be costly to the signaler, costing the signaler something that could not be afforded by an individual with less of a particular trait."

If you read the entire paragraph, and understood nothing, you may have wasted 2 minutes of your time.

Anyway, just like a male peacock having long tail feathers to attract females that will make it an easy target for predators, fiddler crabs carry about this colossal claw that will make it an easy target for predators when they wave it about. In doing so, these fiddler crabs shows to the females that even though they have this pretty useless big claw, they can still survive with it, and also with just one small claw to get all the food it needs. It proves to the females that the male has the strong genes that will enable it to survive despite this handicap.

To put it simply, it is similar to having something that does nothing, yet in doing nothing does something!

Around us, this handicap principle could be observed. To put it in a rather crude manner, rich men often purchase big sports cars to attract the ladies, and the ladies, seeing this big sports cars, knows that the man have the ability to obtain this liability, and they will go for such men.

Of course, these claws are not just pretty ornaments that the crab carries proudly about. It does have its uses too. Especially in fights. 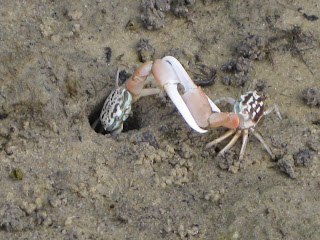 The above picture is one of the my favourites, even though it is not very clear, but I feel that it is almost a "once in a lifetime" kind of thing that would not happen again in front of the eyes for quite a long time.
Posted by Yu Shang at 5:28 AM 1 comment:

What in the world is uca?

Uca is actually the name of the genus of fiddler crabs.

What are fiddler crabs? 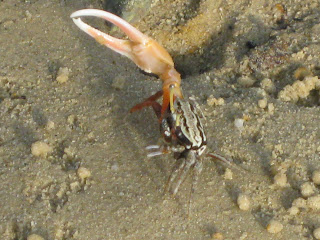 For starters, this image above is a picture of a male fiddler crab. Notice the huge claw that the crab in the picture is waving? Only the males have them. Remember the nursery rhyme, whereby one line goes: " the cat and the fiddle"? It was given this name because the movement of the small claw from the ground to its mouth, across the big claw, resembles the action of a person moving a bow (small claw) across a fiddle (big claw).

Why uca?
I know that this is a question that will definitely be asked, but since the story of its origin is too tedious to be told, let us just leave it as that, shall we? Perhaps some other fine day, where the sky is clear and the flowers blossom in the refreshing breeze, I will relate the tale. 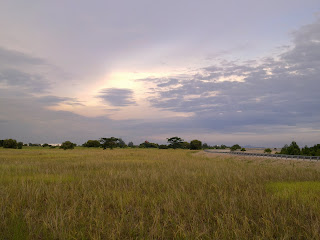 Other blogs to visit